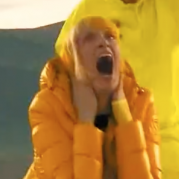 I think the over singing...

Personally, I think there were three factors that played into Xtina not managing to sustain.  1. There has always been a considerable amount of time between her albums. This is not inherently a b