Grimes to appear on SNL tonight

by BUtterfield 8
May 8 in Movies & TV

Annoyed SNL is giving him a platform. Just like they did Trump. 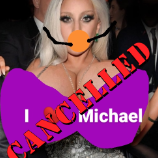