SL doesn't deserve the hate it gets. 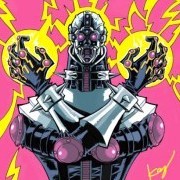 If you hate Stupid Love, you have zero taste

Blame Interscope and Gaga for releasing a song that got leaked a month before, not the the song itself. I'm 100% sure SL would be a fan favorite had it not been the lead single. It got bad rep because

Gaga's stubbornness, that you claim to have ruined the era, is one of the things that makes me love it even more. She did what she wanted to do no matter what happened. It is clear that SL was going t