Bloody Mary is OFFICIALLY a single in France

After eleven years of release, Bloody Mary was serviced to radios and is officially Born this Way’s 6th single in France. Let’s hope other countries follow soon 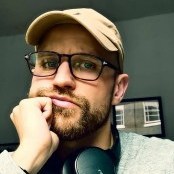