Ariana Grande - thank u, next 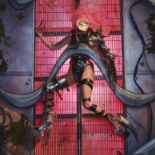 by AMENiCURE
February 7, 2019 in Entertainment News