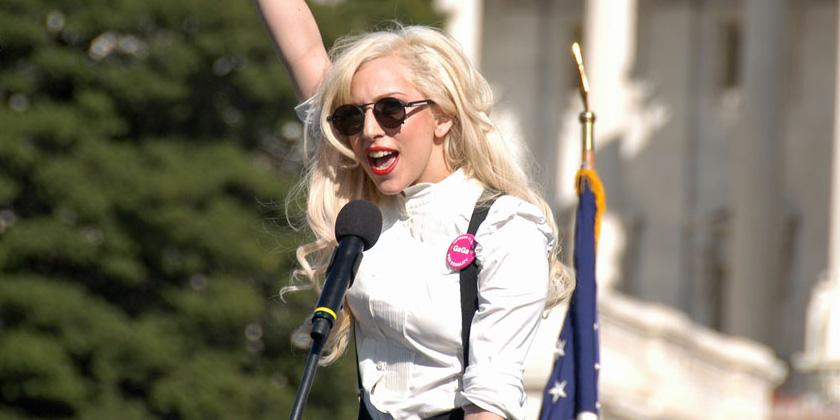 To mark the International Day Against Homophobia and Transphobia, which is being celebrated across the world today, we have collected ten of the most inspiring Lady Gaga quotes on equality and LGBT rights.

1. It's never wrong to love, but it's always wrong to hate.

When asked about homophobia in hip-hop in a 2009 interview with Fuse TV, Lady Gaga had this to say: "I feel even just in the music industry that there's very public misogynistic and homophobic behavior. When I hear one of the most famous rappers in the world say something homophobic on the radio, I want people to yell at him. I don't have to say who because they know who they are. It's not just hip-hop, it's everywhere. It's wrong. I'm not trying to create and generate more hatred in the world... I just want to generate awareness. It's always wrong to hate but it's never wrong to love."

2. They say this country is equal, but it's not equal if it's sometimes.

In 2010, Lady Gaga took the stage at the National Equality March in Washington, D.C. to demand equal rights for the gay community. "Obama, I know you are listening," Gaga said before screaming, "Are you listening? We will continue to push you and your administration to bring your words of promise to a reality. We need change now. We demand actions now."

3. If we don’t stand up for what we believe in, pretty soon we’re going to have as much rights as the meat on our bones.

Lady Gaga brought four members of the U.S. Armed Services, who had been discharged because they were openly gay, on the 2010 MTV Video Music Awards red carpet. Later that night, she wore a dress made of raw meat to make a powerful statement on equality. "What I was really trying to say was dead meat is dead meat," she told Anderson Cooper. "And anyone that's willing to take their life and die for their country is the same. You're not gay and dead, straight and dead. You are dead."

4. Equality is the prime rib of America, but because I’m gay, I don’t get to enjoy the greatest cut of meat my country has to offer.

5. I'm beautiful in my way, 'cause God makes no mistakes. I'm on the right track baby, I was Born This Way.

In 2011, Lady Gaga released her anthem "Born This Way," which changed the lives of millions of people and started a movement of love, equality, and acceptance.

6. Modern social issues are real, they are serious and the laws that confine them having an overarching effect on humanity.

Standing before St. Peter's Basilica, Lady Gaga spoke in front of thousands of fans at Europride 2011 in Rome. "Let us give birth to a new and international ideology," she urged. "Let us come together and synthesize our histories into today. Let us be revolutionaries of love and use our human powers, our very strong human powers, to save lives and encourage unity around the world."

In 2012, Lady Gaga brought her Born This Way Ball tour to Russia, where she was threatened with prosecution for supporting gay rights. During the show in Moscow, she said: "I can't even believe that you're all here because when they first called me they were like, 'we want you to go to Russia but we might have some problems because of all the gay propaganda in your show’. Thank you for spreading the message of equality around the world. Thank you for spreading the message of Born This Way."

8. We're not in the same place that we were 25 years ago when it comes to being gay.

During on of the Born This Way Ball shows in New Zealand, Gaga said: “We’re not in the same place that we were 25 years ago when it comes to being gay. Why do I have to be gay and be a cunt? Why do I have to be gay and have to slice you to defend myself? Why if I’m gay do I have to ah be shady or bite you because I want to defend and separate myself from humanity. We’re not in that place anymore. There’s no need to put people down. With Born This Way, a lot of people tried to stop me, and they still will. But the truth is, it’s not working. It’s not working because it’s not relevant anymore to be hateful about equality. It’s not relevant anymore to be bitter. It’s not relevant anymore to hold on to the past and hold on to the pain of what was, what’s relevant now is to leave that all behind and look forward to a future where it doesn’t matter what you are because we are all human and we all deserve to be valued and know our value no matter where we are. So that’s what my message is.

9. What the Pope thinks of being gay does not matter to the world.

In 2012, to Pope Benedict's comments about same-sex marriage being "defective." She said: "I think that gay marriage is going to happen. It must. We are not actually equal — humanity — if we are not allowed to freely love one another…What the Pope thinks of being gay does not matter to the world. It matters to the people who like the Pope and follow the Pope."

10. If anybody here is uncomfortable with this you should fucking go because you’re on the wrong side of history.

Lady Gaga brought an audience member on stage at the artRAVE in Manchester to help him propose to his boyfriend. "I just want to do something special for you," she said. "I’m not sure, but I think that Jay might have something to ask you." After the man got down on one knee, Gaga wished the couple a "beautiful, long and happy marriage" and added: "I’m pretty sure I don’t have to say this because this a pretty free-thinking city but I’m going to fucking say it anyway: if you are living in the UK or in Manchester and whether you are young or old or in the middle, if you are gay hold your head up high and be proud. You don’t have to hide. You’re human. And if anybody here in the audience, I can’t imagine there is, but if anybody here is uncomfortable with this you should probably fucking go because you’re on the wrong side of history and everybody in here is on the right side."