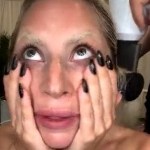 Diane Warren in the background is sending me for some reason.