I'm going to admit I've been uncomfortable with the misogyny I've seen exhibited toward Amber Heard and how people, even friends of mine and people whom I respect on this site, have commented on the t

Honestly...some of this stuff genuinely should make people uncomfortable. I maintain what I've said all along...there was lying, shadiness, and dark things that were done on both sides of this and yet 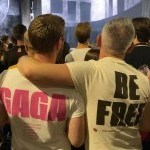 To summarize: - Depp manipulated photos of his own injuries and submitted them into evidence - Depp accused Heard of doing the same, proven to be false - Depp edited and manipulated audio