by Lighter
January 11 in News and Events 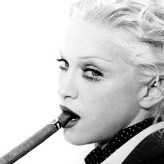 There is nothing on this earth like Lady Gaga on a press tour. Please can we send her to do press tours for movies she doesn't even appear in?

Gaga, I think that means you need to shower!