by Teletubby
September 13 in Entertainment News 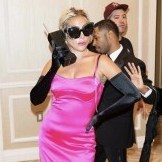 Boring janet jackson try hard moves and the queer bait, as if she would dare to kiss a girl on that stage. Thank you, next.