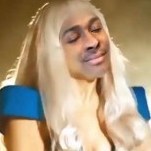 by ShayCristoforo
September 18, 2019 in Gaga Thoughts