It doesn't belong to either of you wtf Get a grip these photos belong to the photographers, it really doesn't matter who had them first or who leaked them. Calm yourselves. 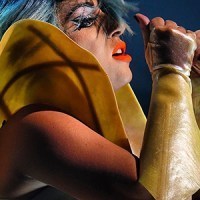